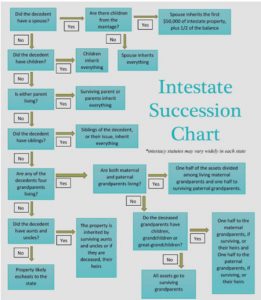 You’ve probably heard the phrase “get it in writing,” which is a commonly used phrase in the world of business. That advice also can apply to estate planning. The best way to make sure that your goals for your estate become reality after you die is to put them on paper while you’re alive. To make sure you have a well-written estate plan that will achieve the outcome you want, be sure to retain the services of a knowledgeable Hoboken estate planning attorney, who can show you the best way to get to your desired goal.

A case from Middlesex County shows the pitfalls that can occur when you don’t put anything in writing. R.F. was a man who died with no will or trust. His only legal heir was a brother who lived on Long Island. R.F. did have a stepson, but he never adopted the stepson, so the stepson was not a legal heir.

Because R.F. left behind no will or trust, all of his assets were distributed by what’s called the “intestacy” statutes. Those are laws that look to identify the closest class of heirs at law, and to distribute the deceased’s assets to them. In this case, that meant a distribution of 100% of the estate to the brother on Long Island.

There are lots of ways that leaving the distribution of your assets up to intestacy can go very wrong. For one thing, if you amassed substantial wealth but left behind no surviving spouse and no known children, you potentially can create a “feeding frenzy” of people claiming to be your long-lost “love child” or half-sibling from way back when. A version of this happened when rock-n-roll superstar Prince died. He left behind no written estate plan, no surviving spouse, no surviving parents and no known living children, raising significant questions about how his millions and his massive catalog of music should be distributed. Many, many people intervened in the probate case, alleging that they were children or half-siblings of the late musician.

Desiring to include someone in your estate who is not legally related to you — or is not related very closely – is another scenario where things easily can go wrong under the intestate statutes. In the days before civil unions, domestic partnerships and marriage equality, this was a very big deal for same-sex couples, as dying intestate would often have the result of leaving one’s partner with nothing from one’s estate. The same can be true if you have a cherished friend or dear caretaker whom you want to leave something.

In R.F.’s case, the 100% distribution to the brother remained in place even after a challenge by the stepson. The stepson argued unsuccessfully that he should be the sole heir of the estate. His evidence was that his mother married R.F. when he was three, that R.F. was the only father he had ever known and that the only reason R.F. never legally adopted him was that the stepson’s biological father refused to acquiesce to the adoption.

This was all potentially important evidence for what New Jersey law calls an “implied agreement to adopt.” If you can show that such an implied contract existed, then you can potentially be declared by the court to be the equivalent of a legally adopted child, which means being on the same legal footing as a biological child. For this stepson, that potentially could have meant going from receiving 0% of R.F.’s estate to getting everything.

Proving an implied agreement to adopt is very difficult, though. Because such claims are prone to fraud and “are easily fabricated,” there is an extremely high burden of proof required to establish this implied contract. R.F.’s stepson didn’t have the necessary level of proof and so his case failed.

R.F.’s case is a cautionary tale about the pitfalls of leaving one’s asset distribution up to the state’s process of intestate succession. If his true goals were to include his stepson in his estate, then a will or trust could have avoided the regrettable outcome of a distribution that deviated from his wishes, which (if true) is what ended up happening. Even if the man actually wanted his brother to get everything, a will or trust could have made that objective clear and avoided the expense and delay caused by estate litigation.

Pretty much everyone can benefit from a properly drafted will or trust. Getting your goals on paper means greatly enhancing the odds that what you desire for the distribution of your assets will be what ultimately happens. For the best way to accomplish your goals, reach out to skilled Hoboken estate planning attorney Frank Marciano. Attorney Marciano and his team have years of experience helping families just like yours. To set up a consultation, contact the office online or call 201.656.1000.