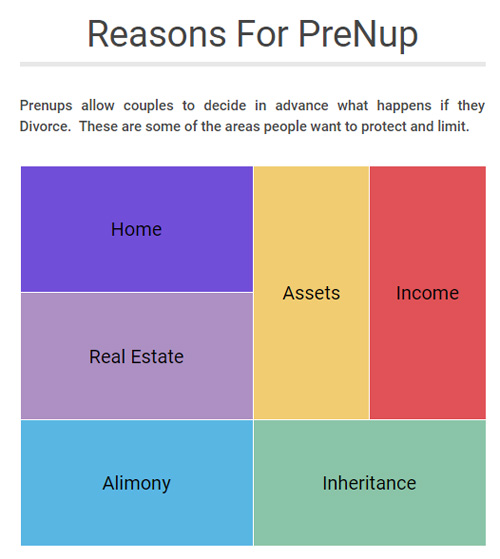 The reality is actually much different, and more people are realizing that. According to a recent report, more spouses-to-be are seeking the benefits that a prenuptial agreement can offer. One thing to keep in mind if you’re considering signing a prenuptial agreement is what an impactful decision that is. Once you’ve signed the agreement, your options for getting it invalidated later are fairly limited. (This, by the way, is another reason why you shouldn’t go into the process alone but be sure you are represented by a skilled Hoboken family law attorney.)

According to that recent report, 62% of lawyers who responded to an American Academy of Matrimonial Lawyer survey reported an increase in the number of clients requesting services related to establishing a prenuptial agreement. One attorney, who noted an uptick in prenuptial agreements among second marriages, concluded that spouses had negative memories of their previous divorces and “don’t want the uncertainty of having a judge decide their fate.”

That isn’t the only possible explanation, though. Sometimes, it may be two spouses entering a second (or subsequent) marriage, who already have families from their first marriages, and who simply want clear documentation of their mutual desires that each spouse’s assets stay within that spouse’s pre-existing family.

As the article notes, there are still other scenarios that have become increasingly common in this modern era and that might indicate a need for a prenup. Partners may decide to use a prenuptial agreement if one partner enters the marriage strapped with massive student loan debts (and the other is relatively debt free,) in order to protect the spouse-to-be who has the smaller debt load.

There are a few ways to escape a bad prenuptial agreement, but they are a small number. Many of them relate to full and proper exchange of financial information between the parties, which is required so that each spouse-to-be can make an informed decision about the terms of the agreement. Under New Jersey law, if your spouse did not provide you with a complete and fair disclosure of his/her income, property and financial obligations, then that non-disclosure is one thing that can make your prenup what the law calls “unconscionable,” which means you can get a court order declaring it unenforceable.

Another way that a prenup can be unconscionable and therefore unenforceable is if it leaves the less well-off spouse destitute. The law strongly dislikes outcomes that leave widows, children or divorced spouses dependent on public support, so if your prenup would leave you in that degree of poverty or anything close to it, then you may be able to get it invalidated.

On a similar note, prenuptial agreements can be invalidated if they create too great a change to one spouse’s standard of living. You are not entitled to a post-divorce lifestyle exactly as high as the one you lived while married. You are, however, entitled to a post-divorce standard of living that reasonably resembles the way you lived while married. If your prenup would leave you with a standard of living that’s way below the lifestyle you enjoyed during the marriage, then that can be a basis for getting your prenup thrown out.

Whether you are negotiating a prenuptial agreement, needing to get one invalidated or seeking to have one enforced, you need the right legal counsel on your side. Contact knowledgeable Hoboken family law attorney Frank Marciano. Attorney Marciano and his team have many years of helping clients with these issues and are ready to get to work for you. To set up a consultation, contact the office online or call 201.656.1000.