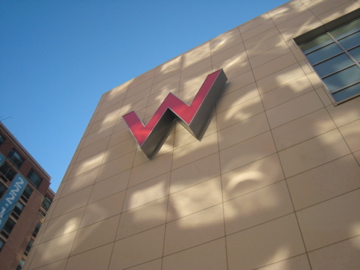 The W Hotel from the outside.

The front desk staff showing off their W’s 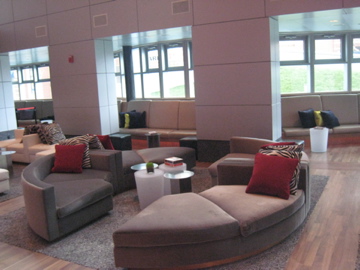 The W Hotel Living room. Now its quiet, at night it’s not.

Some people travel around the world, others don’t. I am one of the others. So, when the opportunity came to check into a world class hotel two blocks from my office, I couldn’t resist. I booked a weekend with my wife, Judy, at the new W Hotel on Hoboken’s Waterfront. In a word, “Stunning”.

Upon arriving at the grand lobby we were whisked away to a level of service and style and swankiness (yes swankiness) that made it hard to believe you were still in Hoboken. The staff was wonderfully attentive, the Zylo Steakhouse was top notch, the night scene was out of a movie, the hotel room was filled with small surprises and a great big comfortable bed, and the view, well the view was just spectacular

Architecturally, it’s breathtaking, upon entering the Hotel you are swept away into a huge open interior space at least 40 feet high. On one side of the lobby a simple flat wall soared to the ceiling with nothing but the word “Welcome” glowing off the surface from a light projector on the ceiling. This image sums up the sense of boldness and lightness that is echoed throughout the lobby. The walls leading to the elevator are made out of some silver metal mesh, literally something out of a museum. The “Living Room Bar” is on the Lobby level is filled with big comfortable chairs strewn around the space to create the sense of home. The subdued use of unique textures and materials and the mix of intimate gathering spaces in a grand open space created an intimate laid back style that is more than a function of architects and blueprints.

I am sure that much of the élan throughout this building was a result of a commitment to excellence which we have come to expect from the Barry family, the owners of Applied Housing. With this building, they have spanned the decades to singlehandedly bring Hoboken out of the smoldering 70’s to the forefront of successful small cities in America. The imaginative force of the Barry family cannot be overstated. Many people dream of great things but few can actually make those dreams a reality. I don’t really know Michael and David Barry, the Barry brothers as they are known in the press, but all the people of Hoboken owe them a tip of the hat for bringing world class elegance to Hoboken. With the creation of the W Hotel, Hoboken has literally shrugged off the lingering image of a quaint city on the waterfront to a small city of the world. To illustrate this point I am listing here a few of the locations where the W Hotel is located (and doesn’t it just look strange to see Hoboken in this mix)

And one more thing, dogs are not only allowed but, as they told us, they are treated as guests; with their own bed, water dish and doggie treats.