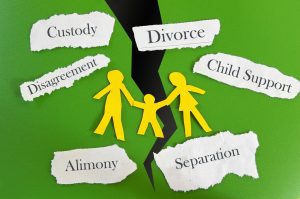 Alimony is the end result of many divorce actions.

Alimony is one of those legal areas that may inspire a great deal of fear and concern among some divorcing spouses. A spouse from a long-term marriage may fear facing a lifetime of alimony, even after his ex-spouse has begun living with a new partner. A spouse from a short-term marriage may fear that she’ll be paying for just a few years of wedded bliss with many years of alimony payments. This post seeks to alleviate some of those fears, which may be unfounded in your situation. Of course, to get the exact advice that you need for your precise circumstances, be sure to reach out to a skilled Hoboken alimony attorney.

L.R. and R.R. were a pair of ex-spouses whose marriage was an example of a long-term one. The pair divorced in 2013 after 21 years of marriage. The trial court in their case ordered that the husband pay the wife permanent alimony. The couple’s marital settlement agreement said that, if the wife began living with someone “unrelated by blood or marriage” for six months, that was cohabitation and would entitle the husband to revisit the issue of alimony and potentially get his permanent alimony terminated.

By 2015, the wife had a new man in her life, and the husband had a licensed private investigator. The PI was able to obtain evidence that persuaded the court that the wife was cohabitating and that the husband was entitled to a termination of his alimony obligation.

In this husband’s case, there was a great deal on the line financially, since he was paying several thousand dollars twice a month and possibly stood to continue doing so until he died, his ex-wife died, or she remarried.

How has alimony in long-term marriage cases changed under the reformed law?

That couple’s case took place in 2013, just one year before the state passed an alimony reform law. For couples who divorced in 2014 or later, things probably would transpire differently than they did for that couple. For one thing, permanent alimony is no longer a permissible option for courts to order. Before the reform, permanent alimony was the most commonly awarded option for cases in which the marriage was a long-term (20 years or more) marriage.

New Jersey law still allows spouses who were in long-term marriages to obtain a longer-lasting alimony award. The judge cannot award permanent alimony, but the judge can order open-duration or indefinite alimony. That allows the recipient spouse to continue receiving alimony until some significant change occurs.

For example, the reformed law allows paying spouses to seek termination when they reach the federal retirement age, which wasn’t an option before. Be aware, though, that taking an early retirement generally will not open the door to a termination of open-duration alimony.

And what about shorter marriages?

If you’ve been married for only a short time and are considering a divorce, you may fear that this divorce is going to cost you many thousands of dollars across many years. Fortunately for you, this was one area addressed by the 2014 reforms, and it provides good news for you. Under the reformed law, if the marriage lasted less than 20 years, the duration of alimony could only be, at the maximum, a period of time equal to the length of the marriage, unless your spouse proves the existence of some special circumstances.

For example, if you were married for only two and a half years, the judge in your case typically cannot, in the absence of special circumstances, award alimony for a duration any longer than 30 months, although the judge could order a shorter duration.

Law, like a lot of areas of knowledge, is something in which misconceptions among the public can crop up and spread virally. Don’t make an enormous life decision based on what you think the law is, or what your friend from the office suggested that it was. Get the answers that you need from a seasoned legal professional whom you can trust. Knowledgeable Hoboken family law attorney Frank Marciano, backed by his helpful team, has what it takes to help you get a fair resolution to your alimony case. To set up a consultation, contact the office online or call 201.656.1000.