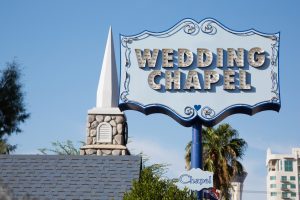 Wedding chapel sign in Las Vegas. In the background a false bell tower.

The concept of a “joke” wedding or drunken tying of the knot is often a source for humor, in both music and television. Country music singer Carrie Underwood covered such an event in song in 2009, and Ross and Rachel did it at the end of the fifth season on Friends. Las Vegas chapels today offer the option of a “pretend” wedding, in which there’s no authentic marriage license and no actual marriage. However, if you go through a real Vegas wedding with a genuine marriage license, then you’re legally married. If, after you return home to New Jersey, you realize your Vegas wedding was a case of “Oh no! What have I done?,” then one of your first steps should be to reach out to an experienced Hoboken divorce attorney to discuss your circumstance. Your Vegas wedding has created a legal marriage with real legal consequences, and you will likely need a legal divorce solution to end that marriage.

As noted above, if the wedding you now regret was a pretend one, you can just dispose of the hardcopy and electronic memories and move on. If it wasn’t pretend, it it’s going to take something more, as one woman who recently wrote to NJMoneyHelp.com learned. That woman had married a platonic friend in Las Vegas as a joke. Several years later, the man met another woman whom he desired to marry in sincerity.

The reality is that the author’s friend would likely need to divorce the author of this letter before he could marry his current fiancée. Even if the author and her friend were intoxicated or not sincere when they pledged “’til death do us part,” those facts do not invalidate a marriage. Additionally, your Vegas wedding means you’re legally married in all 50 states, including back home in New Jersey.

New Jersey’s uncontested divorce option may be a big help

For couples like this author and her friend, uncontested divorce may be a useful way forward. Uncontested divorce can be a very valuable option for many couples who are legally married but who never actually lived as husband and wife, such as the case of couples married in drunken or joke weddings in Vegas. It can also be a very worthwhile option if you and spouse married briefly, perhaps later in life, but never actually merged households.

In a situation like this author’s, she and her “spouse” have maintained contact with one another, both desire to get divorced and, hopefully, both are highly motivated to agree on all outstanding issues. These facts are all helpful in allowing an uncontested divorce to proceed without delay.

If you and your spouse with whom you have no children agree on all outstanding issues (such as the distribution of assets and alimony,) then you may be able to get your divorce very quickly. You and your spouse can, for example, enter into a marital settlement agreement that effectively says, among other things, “I keep all my stuff, he keeps all his stuff, and neither spouse receives any amount of alimony.”

You can file your divorce and the settlement agreement. Your spouse can file the necessary legal acknowledgement paperwork agreeing to all the terms and waiving his 35-day period to file an answer. Then you can potentially get your divorce as soon as the court can schedule it in its calendar, which may be as quickly as only a few weeks.

What if I don’t know my spouse’s location anymore?

Some people may separate without ever divorcing and eventually lose contact with their spouse. That may not matter much until you find someone else whom you want to marry. Whether you now desire a divorce in order to remarry or for another reason, you can get that divorce, even if you have no idea where your spouse is now. This situation, though, can be more complicated and often requires in-depth knowledge of procedural rules.

Since you will not be able to serve “notice of process” (a/k/a serve a copy of your pending legal action) on your spouse in the usual manner, as you do not know an address upon which to serve your spouse, you will need to use something called “substituted service” or “constructive service.” A skilled attorney can help you make sure that your attempt at substituted service or constructive service meets all of the law’s requirements and is not something that throws up a roadblock and delays your divorce.

People get married for many different reasons and have just as many reasons for getting divorced. Whether or not yours was a quickie Vegas wedding, if you and your spouse agree on all outstanding issues, then an uncontested divorce may be a helpful option. Talk to experienced Hoboken family law attorney Frank Marciano to find what the best path is for you. Attorney Marciano, aided by his helpful support team, has many years of effectively representing New Jersey spouses throughout their uncontested — or contested — divorce cases. To set up a consultation, contact the office online or call 201.656.1000.