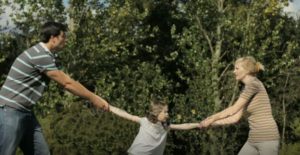 If you know much about geography here in New Jersey and the surrounding area, you know that moving “two states away” or even just “one state away” doesn’t mean the same as it does if you live out west. When you share custody of a child or children with an ex-spouse or partner, this is more than just a quirky bit of trivia. The law in New Jersey says that an intrastate move with a child is not the same as an interstate move with a child, so these state boundaries can be very important if you find yourself needing to make a move. When that happens, you want to be sure that your move is not held up by legal snags, so it is vital to have a knowledgeable Hoboken child custody attorney on your side from the start.

If you live in Austin, Texas, you can go 200 miles in any direction and not have left the Lone Star State. Here in Hoboken, you could make an interstate move simply by moving 5 miles to the east of Downtown Hoboken (which would put you in New York City). You could move “two states over” simply by moving 40 miles northeast to Greenwich, Connecticut.

In New Jersey, the law, generally speaking, used to require you to get court approval if you were moving out of state (no matter how short the distance.) A move within the Garden State (no matter how long the distance) generally was considered to be a decision within the sound discretion of the primary residential parent and did not require any court involvement. Of course, that can lead to some peculiar results, like possibly allowing a parent to move 150 miles from Hoboken to Cape May with no court approval while requiring another parent to litigate a move of less than 10 miles from Hoboken to Queens.

The rules changed after the New Jersey Supreme Court issued its ruling in the 2017 case of Bisbing v. Bisbing. Now, in-state moves are no longer presumed to be within the discretion of the primary residential parent. Both in-state and out-of-state moves require the primary residential parent to show that the move is in the best interests of the child.

State borders remain a relevant fact, however. In a ruling from last year, the Appellate Division court explained to parents that the standards for litigating these child relocation cases are different procedurally. If you’re the primary residential parent and your ex wants to challenge your move from Hoboken to Brooklyn, then your ex need only persuade the judge that the move is not in the best interests of the child.

If, however, your ex seeks to challenge your move from Hoboken to another place within New Jersey, the law says that the petitioner (a/k/a the person opposing the move) must first prove that move constitutes a significant change of circumstances and then show that the move is contrary to the child’s best interests. Again, geography has the potential to be very important. If the non-primary residential parent currently lives 10 minutes away from the child and has substantial time with the child in his custody, then a move by the primary residential parent to someplace far away like Cherry Hill or Cape May might be a substantial change in circumstances, where a move from Hoboken to North Bergen might not.

Whether you are a primary residential parent who needs to move from New Jersey to another state, or you are a non-primary residential parent whose ex is seeking to move two hours away to a town on the other end of this state, you need the right legal counsel to help you navigate the legal processes effectively and efficiently. Knowledgeable Hoboken child custody attorney Frank Marciano is here to help. Attorney Marciano has helped many parents protect their relationship with their children and navigate the legal system for child custody cases. To set up a consultation, contact the office online or call 201.656.1000.