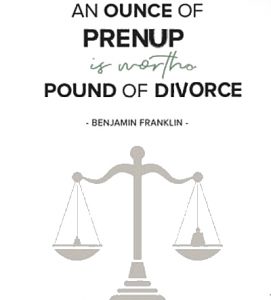 It’s been more than a decade and a half since hip-hop star Kanye West scored a hit song that opined that a “prenup… [is] something that you need to have.” Today, more and more people are agreeing. The group leading the current surge to acquire prenuptial agreements is, according to news reports, the Millennial generation. If you’re preparing to marry, whether or not you’re a Millennial, it is worth your while to contact an experienced Hoboken family law attorney and find out if executing a prenuptial agreement makes sense for you.

Based on these recent reports, many of the reasons Millennials are gravitating to prenuptial agreements are very good ones and something from which anyone who’s contemplating marriage can learn… regardless of age.

Here are some of the reported reasons why Millennials are getting prenuptial agreements and why, potentially, you should, too.

Older generations often frowned upon prenuptial agreements as fatalistic and materialistic… planning for a marriage’s failure before the marriage had even begun. Some even believed that creating a prenuptial agreement increased the chance of the couple’s divorce, even though the research said otherwise.

Millennials, by contrast, are more pragmatic about marriage and the issues related to it. According to Business Insider, one-third of Millennials are children of divorce. This gives them a keen understanding of marriage as a legal institution and, sometimes, a first-person understanding of the pitfalls and drawbacks of a hotly litigated divorce case. By creating a prenuptial agreement, the spouses-to-be are working to ensure that they (and not the courts) are in greater control of what happens to their assets if the marriage ends, and they are doing so collaboratively at a time when emotions are less fragile, and nerves are less frayed.

They are marrying later… and they have more assets

100 years ago, many couples wed in their teens or early 20s and went directly from their parents’ homes to the marital home. That meant the newlyweds often had extremely little or no wealth in their own names.

Today, many Millennials are getting married much later. In 1962, only 10% of 30-year-olds had never been married. Business Insider found that that number had climbed to nearly half (46%) in 2018. This means that Millennials have had a longer period of time to accumulate separate, non-marital wealth, whether it’s a home, stock holdings, or a retirement account. A prenuptial agreement helps the spouses-to-be ensure that, generally, the things they brought into the marriage on their own are things they will take away from the marriage.

They also have more debts

As a CNBC report noted, a substantial chunk of the estimated $1.5 trillion in outstanding student loan debt falls onto the shoulders of Millennials. Millennials understand that, in a divorce, just because you didn’t enter a marriage with student loan debt responsibility doesn’t mean you won’t leave with it.

In some circumstances, the law lags behind technology and society. That can be especially true in family law, where many concepts and standards were established decades if not centuries ago and society has changed a lot in the intervening time.

Today, many Millennials have pets that they view as family members, but they know that the law in most places views these “fur babies” as mere property — no different than a sofa or a laptop. They may have frozen eggs or embryos and be aware that courts have often struggled to deal with those kinds of cases.

Do you think you might need a prenuptial agreement? Are you unsure where to turn to get the answers you need? For reliable advice from a skilled professional, count on knowledgeable Hoboken family law attorney Frank Marciano. He has helped countless people just like you and is ready to get to work for you. To set up a consultation and find out how this office can help, contact the office online or call 201.656.1000.