END_OF_DOCUMENT_TOKEN_TO_BE_REPLACED

Those profound words of wisdom spoken by Humpty Dumpty in “Through the Looking Glass has special relevance in the world of Law.  Clients often want to know, in no uncertain terms, what is going to happen.    While I win?; How Long will it take?; What is the Answer?; Can you Guarantee? How much will it cost? are all questions I get after clients give me a one sided, 5 minute summary of their problem.   While I do my best to estimate my fees and give an educated guess as to the outcome of a case, no one, no lawyer, can guarantee a result.  In fact the entire Court system with motions and appeals, and different courts is based on the fact that in real life nothing is crystal clear.  Most of the time the issues are clear enough so the answer to a legal problem is clear, except of course when they’re not.  Take for example a simple case of tenant being evicted for non-payment of rent.

Simple enough, you don’t pay your rent you can be evicted.  Except of course, if you were being overcharged, then rent control laws might determine that, not only will the tenant not be evicted, that the Landlord owes the Tenant money.  Or if the rent was held back because the condition of apartment was substandard, then the Tenant can not only stay but the Landlord would have to fix up the apartment.  Or how about the case when the Landlord tries to collect rent, even though he lost control of the property though a foreclosure, and is not entitled to collect the rent.  Or how about the case when the tenant, having not paid rent, files for bankruptcy, then the Landlord is prevented from evicting the tenant because the Bankruptcy laws stay all proceedings.

END_OF_DOCUMENT_TOKEN_TO_BE_REPLACED

In an effort to mortgage out America’s future at ever increasing speeds, the Banks and mortgage companies apparently forgot to do their homework.  Missing signatures, missing documents even totally missing files are preventing lenders from proving their cases in a Court of Law.  For all the bad things that can be said about the judicial system it is pretty gratifying to see the Courts of America not buckling under the pressure of these huge institutions as they try to crush America homeowners.  It a lot like the Baseball players that get in trouble with steroids while the Baseball Club owners who benefited from the increase business and value that the steroid players made for them just seem above it all.  But in the Courts where justice is Blind, the big Lenders have to prove their case like any other litigant.  This is truly and exciting time in the world of Real Estate, What happens when a bank cant prove in a court of law that they own a mortgage and then cant foreclose.  Can the homeowner just walk away, Its all new due to the digitization of the mortgage process.  All I can say is that in all my years of practice I have never seen such disarray in the mortgage process. Of course it hurts new loan applicants since the Lenders are now crossing their T’s and dotting their I’s three or four time before they release a loan from underwriting but is great to see that the Banks cannot just bully are court system into taking over the homes of hardworking Americans.  Stay Tuned Hoboken for what is sure to be an interesting year!! 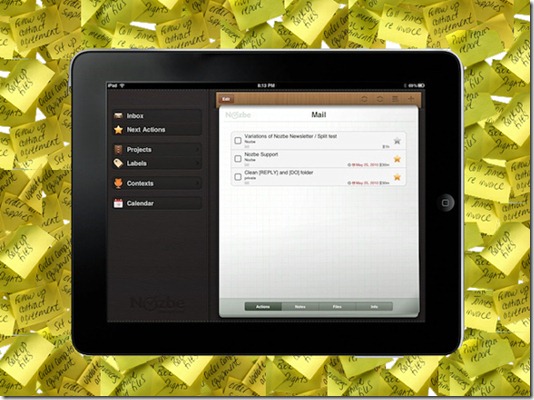 The above is a picture of a new software program on the IPad called Nozbe, a task and team management program that is helping to keep us organized and so that we can Get Things Done.

I don’t need to explain how busy a person’s life is in  today’s work environment; too much information and not enough time.  Over the last few months I decided to explore the internet for team and task management  programs to try to create a more organized office that would makes us more efficient and better able to respond to our client matters.  After trying out over 75 programs we have decided to incorporate Nozbe into our daily routine.  It is a Web 2.0 program but it also has an IPhone and IPad Application.  It is a collaborative task management program that allows all of us here at Marcianolaw to assign and track all those things that must be done in a law office.  While it will not make us perfect we are trying hard to create a transparent and responsive client attorney experience.  You can also sign up for a free trial and take advantage of a truly useful tool that will help organize your daily life.  If you want to learn more feel free to contact Frank at the office.

END_OF_DOCUMENT_TOKEN_TO_BE_REPLACED 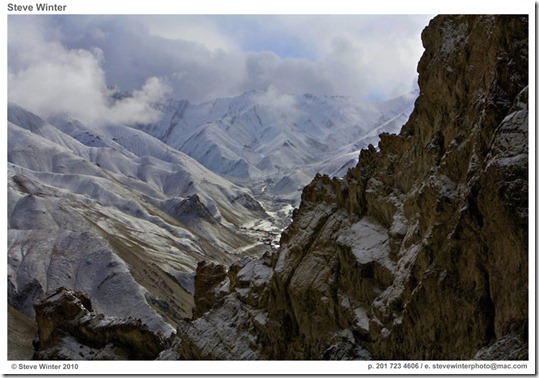 Geographic Photographer who was going to Thailand to  photograph Tigers in the Wild.

END_OF_DOCUMENT_TOKEN_TO_BE_REPLACED The First Blimpie ever was built in Hoboken in 1964, and over the past few months this true Hoboken Tradition was almost forced to leave because of their Landlord’s tricky attempt to try and double their rent.  Well, they lost at the trial level and then went to the New Jersey Appellate Court to try and force their interpretation of the lease regarding when and how Blimpie had to give notice to renew their lease.  Thankfully, they lost again.  In this Appellate Court Decision the Law Firm of Frank Marciano successfully defended an attempt by The Hoboken Blimpie’s landlord to double their rent for allegedly failing to provide a  timely  request  to renew their lease.   You can read the decision here, but before the decision here is a little bit on the History of Blimpie:

Blimpie’s roots can be traced back to three friends armed with an entrepreneurial spirit and a business itch to introduce what the world now knows as the beloved submarine sandwich. After months of research and planning, all the components were in place for them to begin their journey of becoming business owners, with one exception – they needed a name. With a desire to set themselves apart from their competition, they decided to call their sandwiches something other than submarines or hoagies. Hoping to find some inspiration, they paged through a dictionary until they came to the word “blimp” and a picture resembling the healthy, generous-size sandwiches they saw as their competitive edge. That was the “eureka” moment, and the Blimpie sandwich and restaurant chain was born! On April 4, 1964, the three friends opened for business in Hoboken, N.J.

Today with more than four decades of history and locations from coast to coast, the Blimpie brand continues to grow with the strength of its past propelling it forward. Though times have changed since those three friends began their journey, enjoying a meal at Blimpie is still like returning to your neighborhood deli. With fresh sliced meats and high quality ingredients, Blimpie keeps the dream of its founders alive while still setting itself apart from the competition.

END_OF_DOCUMENT_TOKEN_TO_BE_REPLACED 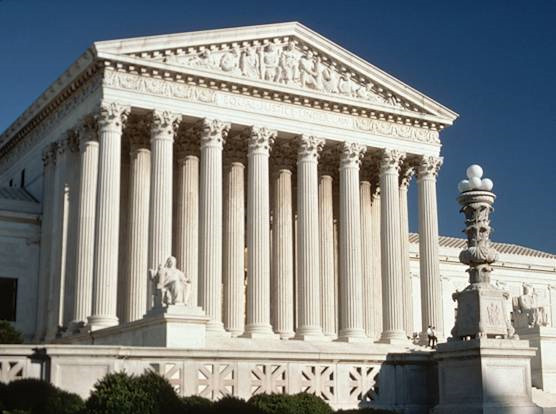 Just received the Appellate Court’s Decision in a trial I had in Hudson County Chancery Court that reversed the Trial Court’s judgment. This was an interesting case involving rent control in Hoboken, reformation and rescission of a contract, and many other points of law discussing what happens when rent control issues come to play in the sale of a multi unit building. It also is a great example of how slow the legal process is and how Judges can be wrong and how the system does allow a person to appeal and overturn a judges decision. For those that are not attorneys it must not make that much sense that decisions and opinions at the trial level are not always correct. In this case the Trial judge is one of the smartest and fairest judges that I have appeared in front of, but for whatever reason he saw the case as presented in way that my client thought was incorrect, so we appealed, and thankfully three appellate court judges took the time and effort to write a 19 page opinion that reversed the trial judge’s judgment so that my client won his case. 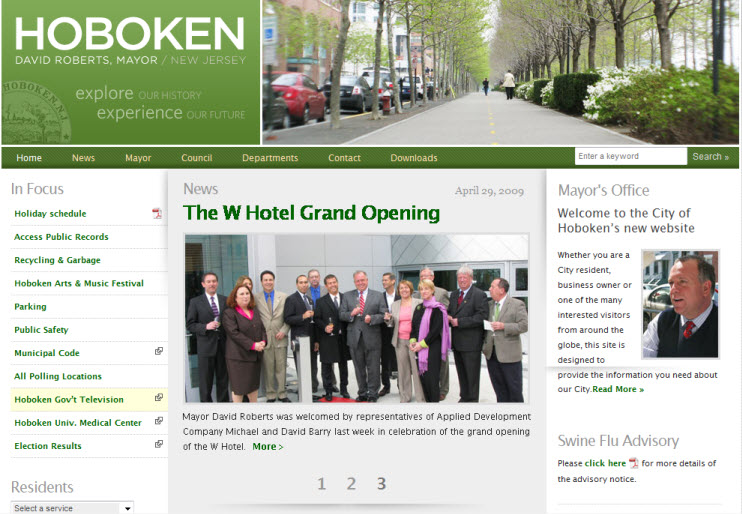 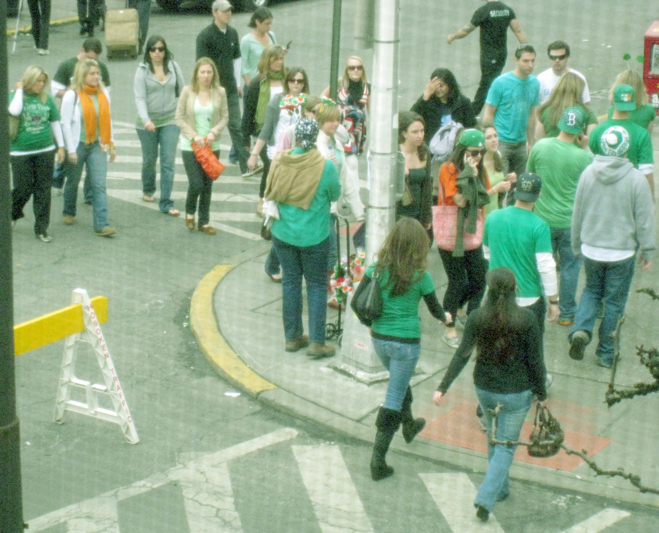 Don’t worry bout a thing, cause every little thing gonna be alright !!! (courtesy of Bob Marley)

I have not seen anything like it since the 1986 bicentennial in Hoboken. The amount of adults, young, full of energy ( and beer) adults that are arriving in Hoboken by Path, by Train by Car by Bus by Ferry and by God I think I see some Helicopters filled with a bunch of green shirts airlifting them in. Hoboken simply is the place to be. Hoboken for all the reasons anyone who has been here knows is a safe wonderful almost mythical town of magic and energy. So some kids (I mean young adults) will cause a ruckus maybe even break one of my office windows, so what. Hoboken is a destination, it is a place where young fun entrepreneurial people want to be. If you want hope if you want good news and encouragement then understand the craziness of Hoboken today shows that there is plenty of energy and options for people, Everything’s gonna Be all Right !!